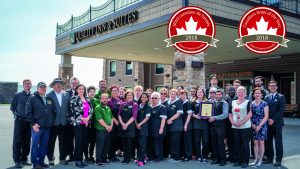 Toronto, ON (May 8, 2018) – Choice Hotels Canada is thrilled to announce the Quality Inn & Suites, Val d’Or has been named the 2018 Canadian Hotel of the Year at the 64th annual Choice Hotels International Convention in Las Vegas, Nevada.

Quality Inn & Suites, Val d’Or was chosen from among 12 hotels for this annual award. The nominees all received a 2018 Platinum Hospitality Award, which recognizes properties in the top three per cent of more than 325 hotels within the Choice Canada family.

“Quality Inn & Suites, Val-d’Or is one of our most awarded hotels across the system,” said Brian Leon, President, Choice Hotels Canada. “The ownership and hotel team truly embody the best of the best and are committed to providing superior guest experience.”

Choice Guest Rating ranks the hotel a 4.8 out of 5, and 99 per cent of guests would recommend. The property is also top ranked in its market by TripAdvisor and receives consistently stellar reviews. Located near downtown, the hotel is owned and managed by the Cree Regional Economic Entreprises Company (CREECO) of Eeyou Istchee and Trahan Holdings of Val-d’Or. For business travellers, the hotel boasts a full business centre with conference facilities. The hotel also operates a hot breakfast service that is free to customers.

Get access to free nights, save with member-only rates and more with our outstanding rewars program.