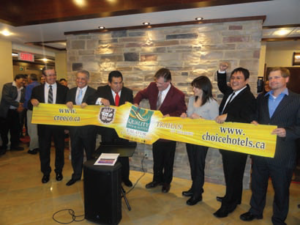 Fernand Trahan, the then mayor of Val-d’Or and a long-time hotelier, and Cree First Nation leader Albert W. Diamond had a dream. Their shared vision was to establish a hotel catering to the Cree community, and, in doing so, create an historic partnership between the Cree First Nation of Northern Quebec and the non-native community of Val-d’Or. Opened on March 2, 2011, the Quality Inn & Suites Val-d’Or, which is owned equally by the Trahan family and the Cree First Nation, is testament to the ongoing legacy of the late Albert W. Diamond. Built on mutual respect and trust, this model partnership between Indigenous and non-Indigenous peoples continues to create funds for infrastructure development and a great variety of programs in the Cree communities of Northern Quebec.

In 1975, the Cree and Inuit peoples of northern Quebec settled their land claims with the government of Quebec in the James Bay Northern Quebec Agreement (JBNQA), the first modern land-claims settlement in Canada. In addition to providing government compensation, the agreement governs the ownership and economic development of the lands traditionally inhabited by the Cree First Nation, affecting 12,000 First Nation members across 100,000 square kilometers. One of the lasting effects of the JBNQA was the establishment of CREECO as a holding company for Cree community investments in 1982. Two previously founded companies—Air Creebec, an airline dedicated to serving the remote Cree communities in the James Bay area, and the Cree Construction Company, responsible for housing and property development in Cree communities—were brought under the CREECO umbrella.

With its explicit mandate to generate funds for community infrastructure and development, CREECO administers the Cree First Nation’s fifty per cent ownership stake in the Quality Inn & Suites Val-d’Or. Any profits from CREECO’s investments, including those from the hotel, are funneled back into the Cree communities to pay for infrastructure development, schools, housing and social programs and other community-centred purposes. All but one of the Cree communities of Northern Quebec enjoy road access today, while Air Creebec provides multiple flights daily out of Montreal, Val-d’Or and Timmins, serving the transportation needs of First Nation members living in Northern communities in both Quebec and Ontario and opening access to the main hubs of aviation.

Located the same distance south from James Bay as north from Montreal, Val-d’Or has been a hub for the Cree communities for decades, serving as a centre for shopping, cultural events, sports tournaments, and many other purposes. Prior to the opening of the Quality Inn & Suites, visiting community members would stay at the L’Escale Hotel Suites owned by the Trahan family. It was through these frequent exchanges over the course of decades that the Cree became familiar with Fernand Trahan and the Trahan family. As a result, when Fernand first suggested developing a hotel in partnership with the Cree community across from his L’Escale Hotel Suites, the trust he had built with the Cree First Nation community allowed its leadership to catch on to the vision. “Fernand Trahan had the expertise and knowledge in the hotel industry. And he had built a reputation in our community. So when he approached us, it made it easy for us to partner with him. He really built our confidence,” Raymond Blackned, a Cree First Nation community representative who continues to serve on the hotel board to this day, explains.

Fernand Trahan found his counterpart on the side of the Cree First Nation in the late Albert W. Diamond, a Cree entrepreneur and community leader whose contributions to the Cree First Nation in Quebec and Canada at large cannot be overemphasized. Hailing from Waskaganish, his unwavering commitment to his community found expression in a great many roles, including band manager, being part of the financial negotiation group during the JBNQA treaty negotiations, first treasurer of the Grand Council of the Crees under the system of governance created by the JBNQA, Chairman for the Board of Compensation, President of Air Creebec, member of the Canadian Aboriginal Economic Development Strategy and Aboriginal Business Canada, and Chairperson of CREECO, among many other business and community interests.

After taking the plan to establish a hotel together to the CREECO board and receiving approval, the Trahan family and the Cree First Nation officially announced their historic partnership on June 28, 2010 at the L’Escale Hotel Suites. Tanya Pash, a CREECO board member and COO of Air Creebec, reflects on the board’s decision: “We wanted to expand at the time. It was a phenomenal investment opportunity for us and it came at the right time. We were able to build a really nice hotel that people enjoy and all the while showing that it doesn’t matter what your different background is and that everybody can work together.”

Prior to the beginning of construction, Choice Hotels Canada joined the evolving venture as third partner, fully embracing the larger vision behind the hotel and seeing an opportunity to expand the brand into Val-d’Or. CREECO had looked at different franchise brands and was ultimately sold on Choice, resulting in the new hotel being branded a Quality Inn & Suites. “Our number one choice was Choice Hotels. They were very accommodating and easy to talk to and they were able to tweak a few things together with us. Since then they have always been there as a support to us. It’s been an excellent partnership,” Tanya Pash recalls.

The 82 room hotel, that is able to accommodate 256 people, and boasts two meeting rooms, was completed in January 2011. A few weeks later, the Board of Compensation held a meeting at the new hotel, aptly making its members the first guests and ensuring that all kinks could be worked out prior to the official opening. Following this soft launch, the hotel officially opened in March 2011. Its outstanding design, exceptional commitment of the staff, and the enthusiastic reception by guests has made the hotel a major success right from the beginning. It has won the Choice Hotels Canada Platinum Hospitality Award every year since its inception as well as eight APEX Awards. In 2014, it won both the Canadian Hotel of the Year Award and the International Hotel of the Year Award for the Quality brand. In 2018, it was once again awarded the Canadian hotel of the Year Award.

With thirty per cent of guests being members of the Cree First Nation and the other seventy per cent non-native professionals visiting Val-d’Or on business, mainly for its extensive mining and forestry operations, the hotel has succeeded in turning the shared vision of Fernand Trahan, the late Albert W. Diamond and the Cree First Nation leadership into reality. While Albert was unable to see his dream come true, his ongoing legacy is recognized at the hotel through the Albert W. Diamond conference room. Remembering this outstanding Cree entrepreneur, community and business leader, whose influence continues to loom large, Tanya Pash reflects: “He was able to walk into a meeting room full of Cree or a meeting room full of non-Cree and integrate himself in it. He was able to walk between both worlds. Together with Fernand Trahan he has created a legacy that will live on in the hotel and the Cree First Nation of Northern Quebec for many years to come.”

Get access to free nights, save with member-only rates and more with our outstanding rewards program.